Stop & Smell the Roses and Don’t Eat All the Ribs

Fall Off the Bone Ribs

Pull off the membrane from the ribs and dry the ribs with a paper towel. Rub each side of the ribs with the salt and pepper. In the Instant Pot, pour the apple cider vinegar/water in and add in a few drops of the liquid smoke. Place the ribs on their side standing up on top of the trivet. Close the instant pot and set it to High Pressure for 20-25 minutes. Allow it to fully naturally release (takes ~25 minutes). 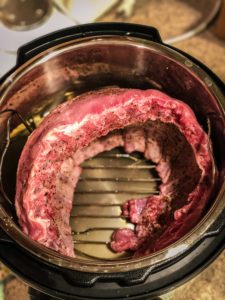 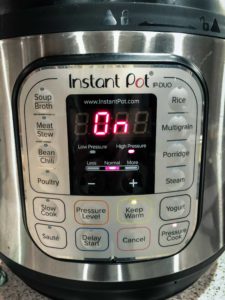 Line a baking sheet with aluminum foil. Brush each side of your ribs with the BBQ sauce. Set your oven to full broil and pop the ribs in (meat side up) on the middle oven rack. Broil until you have a nice carmelized crust on top. Brush again with BBQ sauce when taking out and serve. 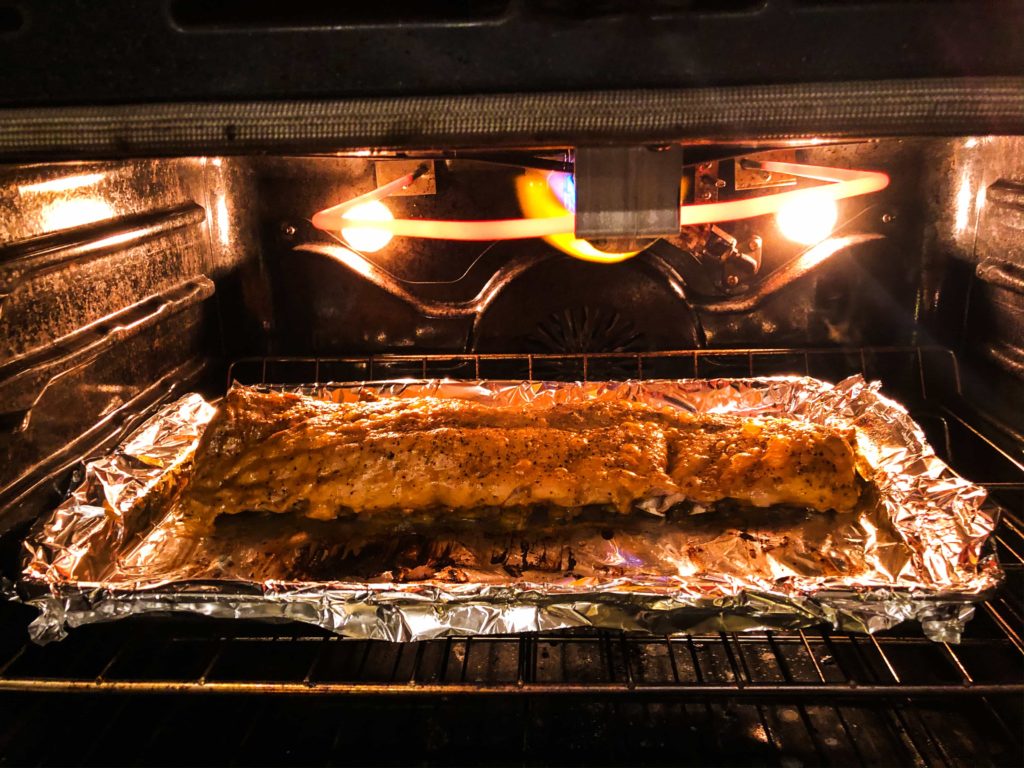 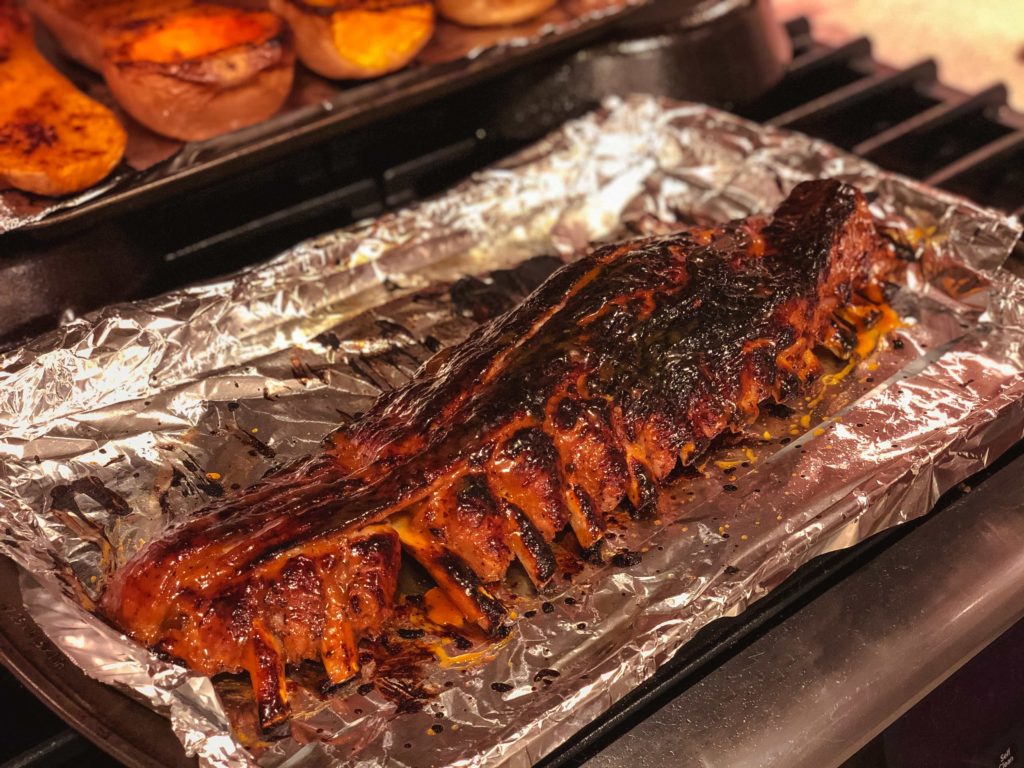 Preheat oven to 450°F. Cut each squash in half lengthwise and remove the seeds. Line a baking sheet with aluminum foil. Place squash cut side up on the tray. Lightly spread the avocado butter on the flat parts of the squash, and then place 1 tsp of the irish butter in the hollowed out section. Sprinkle the squash with cinnamon and brown sugar. Bake for ~40 minutes until squash is soft and easily separates from skin. 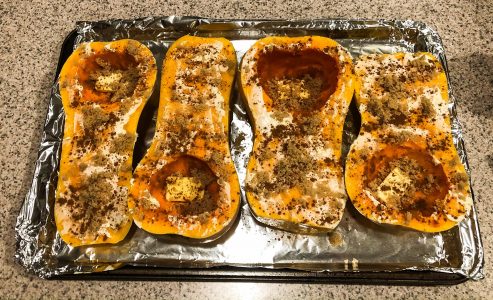 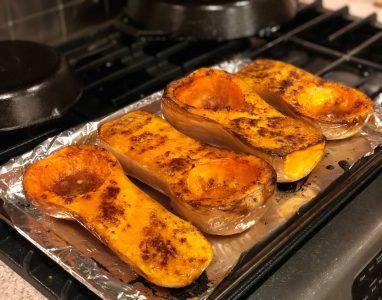 Sometimes I get this hankering for some ribs. I don’t know about you, but I currently don’t even own a grill let alone a smoker. I also have no time to take that many hours to smoke said ribs in the imaginary smoker. However, last Christmas Steve bought me something so life changing that I didn’t know how I lived before: an Instant Pot. If you don’t own one of these bad boys, get off your booty and go get one right now. Seriously, it is the bee’s knees. He got me the big one (which I secretly think is because he wants me to make massive amounts of food that he can gorge himself on….haha). That size can comfortably fit one full size rack of ribs on their side, and it comes with a nice little trivet to set that giant hunk of meat on for easy removal. The way I talk about it, you’d think I’m getting some sort of kick back (alas, I’m not) – I just really love my Instant Pot that much.

So yes. Ribs. I found that I can nearly replicate fall off the bone ribs in my Instant Pot if you use the proper settings and finish it in the oven. Instead of it taking one billion hours of smoking and tending to it, it takes about one hour TOTAL. Let that sink in. ONE. HOUR. Dude… do you know what you can be doing with all those hours you just saved? SO MANY THINGS. Like you could go play putt putt or roller skate. Man, do people still roller skate? I digress…. (you’ll notice that’s going to be a pattern). When making the ribs, I found that if I kind of do a half apple cider vinegar and half water mix with a few drops of liquid smoke, the flavor comes out best… so sweet and chock full of flavor.

You may also be curious as to why I’m using a pink himalayan salt versus a sea salt. I initially did that because the himalayan salt was on sale and then was pleasantly surprised when the flavor was way better. Win-win there, my friend. Now you can rub those ribs with any seasoning you’d like, but if you’re just wanting a simple, classic flavor than you can’t beat good ol’ salt and pepper.

As for that BBQ sauce I mention, that’s really up to you as to what kind you want to use. I used the Trader Joe’s Carolina Gold BBQ sauce in this particular case, but I’m also a big fan of almost all of the sauces by Sticky Fingers and you can’t go wrong with Sweet Baby Rays.

The nutrition facts I list here do NOT include the sauce, so keep that in mind. These aren’t skinny at all, coming up at a whopping 642 calories and 48g of fat, but sometimes you get a craving that only ribs can satisfy. Carl…. (someone please get that reference because it’s hilarious). I used a 4 lb rack of ribs for this calculation, which equates to 64 oz (and each serving size listed on the package is only 4 oz)…. Soooo theoretically this should serve 16 people, but I know how I eat and most of the people I know eat so my nutrition facts are only serving 6 people.

This brings me to a little side note about portion sizes. Bro… portion sizes are hard, and we’re going to talk about this in depth later but for now I’ll just say this. I used to have a lot of trouble figuring out the right amount for me, but I found this handy chart on the interwebz that shows rough size comparisons of what you should have based on the size of your hand. How cool is that? 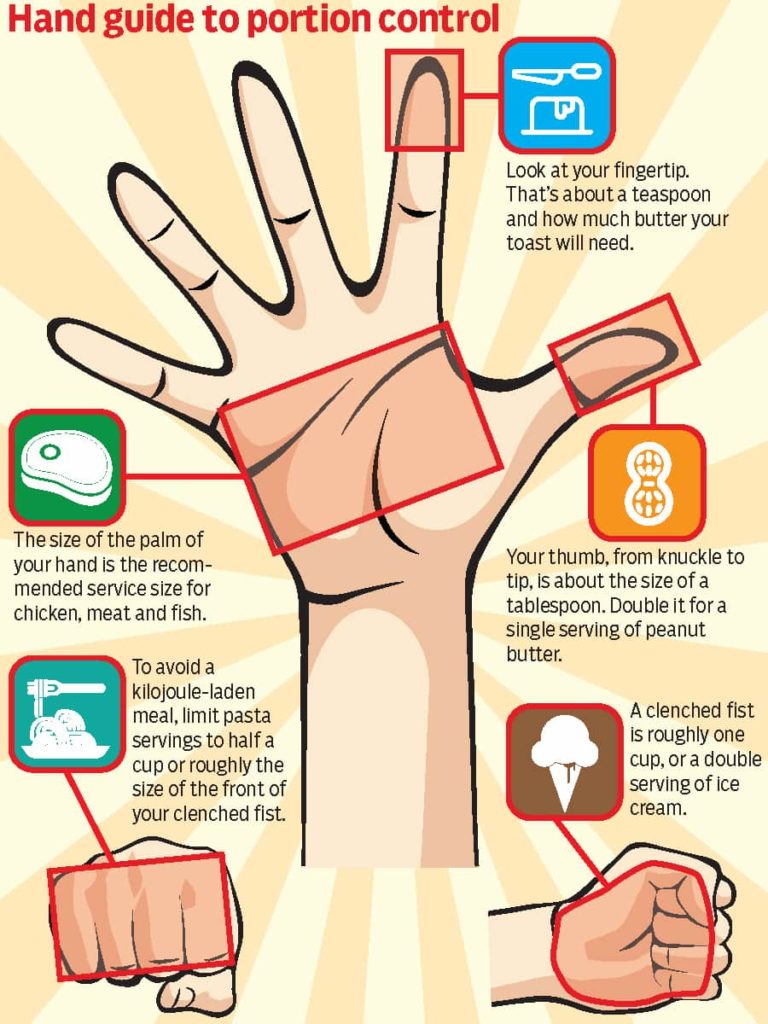 I’m including one on here because it was a great tool that  helped me in my journey. I used to eat way more than what I should and it always made me feel sickly and I was pretty overweight. I also found that the speed at which I ate (like I was in a race) contributed to my constant discomfort and weight gain. We all need to take a breather and savor those bites. This gives your stomach enough time to talk to your brain to let you know when you’re full. Plus, when you take the time to chew your food longer, your saliva helps break down the food, which aides in better digestion. When you eat too fast, you open yourself up to a range of health issues such as Diabetes, Metabolic Syndrome, high blood pressure, obesity, etc. The list is actually pretty long. So for your own health, please slow down, have a meal without distractions, smell the roses and revel in the moment you’re in because it will only be here once.

With all those not great nutrition facts from the ribs, I really needed to balance it out with a healthy side dish. Enter: Butternut Squash. IT’S SQUASH SEASON. I legit have a squash corner in my house where I store the excessive amount of squash I buy before we eat it. At least they’re “decorative” since it’s autumn and all. This recipe serves 4 people… and each person gets a HALF of a squash. How delightful! Right? This one comes out sweet and cinnamony delicious. This makes your house smell like everything that is wonderful about fall.

In my recipes, when it calls for butter I only use three different kinds: Greenfields (or KerryGold) Irish Butter, Pure Blends Avocado Oil Buttery Spread, or Challenge butter. For the studious ones out there taking notes, don’t worry – I will be going in depth on the products I use, why and what are great healthy replacements for the terrible things that have become commonplace.

Until next time, enjoy those delectable ribs and sweet squash. Just don’t eat all of it in one sitting though…. (I’m looking at you, Steve) and don’t forget to smell the roses.