Preheat oven to 400°F. Place the eggplant, zucchini, onion, bell pepper and garlic on a non-stick baking sheet. Sprinkle with salt, pepper and Parisian Bonne Herbes and toss in the olive oil. In a separate baking dish (about 9×13), pour the tomatoes (and their juices) out and break the larger chunks into bite size pieces. Bake both pans in the oven for about 40-45 minutes. The vegetables should be browned and the tomatoes thickened into almost a sauce.

Remove from heat and allow to cool down some. Pour the vegetables into the pan with the tomatoes and stir to combine. Stir in the basil and spread flat and evenly. Make four small wells in the ratatouille, and crack an egg in the center of each. Bake again until the egg yolks firm up and the egg whites turn opaque. 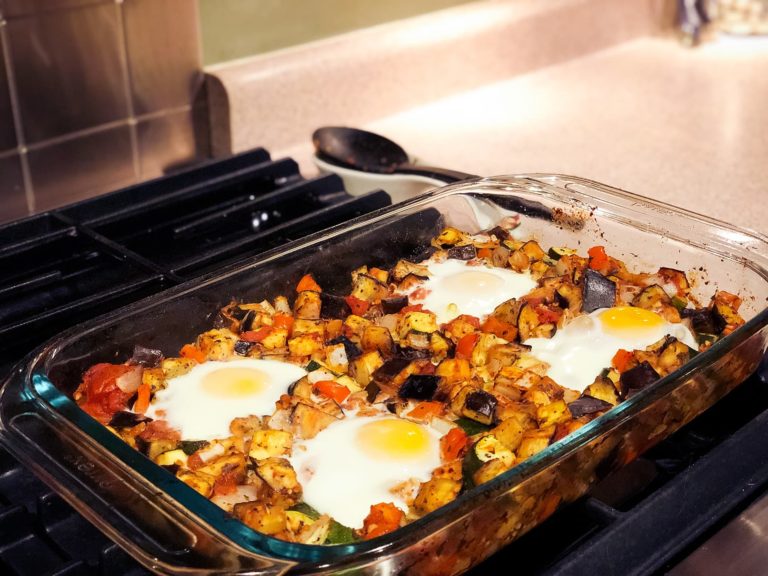 Oh, Ratatouille. Yes, I mean the dish and not the adorable movie with the rat that can cook. I actually used to never know what ratatouille was. It’s origin is from southern France and is considered a stew that’s comprised of eggplant, tomatoes, squash, sweet bell peppers, and onions. The word was used originally in the 18th century, and comes from the French words “ratouiller” and “tatouiller”, which are expressive forms of the verb “touiller” – meaning “to stir up.”᩵᩵¹

Now there are different methods for making ratatouille, but I went for this very low maintenance method rather than the more attentive stove top method. For a more complex flavor palette, you should really cook each vegetable individually. For a more detailed explanation of ratatouille methods, you can check out this archived article. Experiment! Make that ratatouille your own!

I’m going to get a bit real now. I do have to point out that this recipe is mostly safe for pregnant women. You may just want to be careful about consuming eggplant early in a pregnancy as there’s a rumor that there’s possibility of causing a miscarriage. Just like this Good Housekeeping article², I also could not find any scientific research or any documents/studies to support this.

I still recommend caution though as I completely understand the pain of losing a child and would never want anyone to go through this. My husband and I lost our baby a little over a year ago at the end of my first trimester. It was completely unexpected, and sadly I was far enough along that I had to have surgery to remove its tiny remains, as the doctors were concerned that I could bleed out if I tried to pass it naturally. It was completely devastating and heartbreaking and I was unable to talk to anyone for months. I spent most of the time crying on my couch. I still have trouble talking specifically about losing our baby even now. It is so surprising how common miscarriages are in our society now. Our doctor said the statistic is currently 1 in every 3 pregnancies is lost. However, I personally believe that the statistics are much higher after speaking with those we know after we lost our child. In most cases, it was closer to 50% loss. I truly wish that more people talked about this and researched why the mortality rate is so high.

For you created my inmost being;
you knit me together in my mother’s womb.
I praise you because I am fearfully and wonderfully made;
your works are wonderful,
I know that full well.
My frame was not hidden from you
when I was made in the secret place,
when I was woven together in the depths of the earth.
Your eyes saw my unformed body;
all the days ordained for me were written in your book
before one of them came to be."

So if you have gone through this or are going through this now, just know that you are not alone and we are here for you, sister. You should grieve the loss of your baby. Even though its time on this earth was brief, it was still a life and was still your child. I know that it is so hard right now, but over time you will heal and someday you’ll be able to celebrate the life that was lost. God is with you and He always has a plan even if it’s increasingly difficult to see. Have faith, sister.

For I know the plans I have for you,” declares the Lord, “plans to prosper you and not to harm you, plans to give you hope and a future."

Disclaimer: The views and opinions expressed are those of the author and do not necessarily reflect the official position of All Unrivaled. Any content provided by our contributors/bloggers/authors are of their opinion and are not intended to malign any religion, ethnic group, club, organization, company, individual or anyone or anything. Some recipes contain known food allergens. The author and All Unrivaled shall under no circumstances be liable for any indirect, incidental, consequential, special or exemplary damages or injuries arising out of or in connection with your access or use of or inability to access or use the website, content or services, whether or not the damages were foreseeable and whether or not All Unrivaled was advised of the possibility of such damages.